Data.gov is a site intended to give the public access to heaps (in the “heaps” region of terabytes) of government data –from statistics, publications and more. All of this data is available in various formats, like .doc, .pdf, and .csv (spreadsheet). 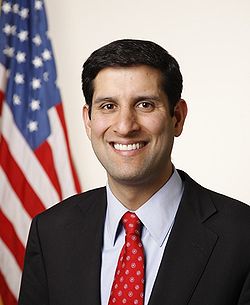 It was created during the Obama Administration, and along with its creation, a new role in the office has also been created: Chief Information Officer (CIO). The CIO, Vivek Kundra (pictured) created this site shortly after his arrival. This role has not existed in previous administrations, thought it is prevalent in businesses across the U.S. This shows a marked interest in bringing the U.S. forward in Technological circles.

A CIO, according to Wikipedia, is “an executive-level position in a company or other entity whose occupant is focused on scientific and technological issues within an organization.”

The role typically focuses on using information technology as a goal to meet its ends. Data.gov is just such a site: information galore.

So now we know what it is, and why it exists. What should we do with this data? What could we do?

There are some great resources out there. Wired has a wiki up where you can view some proposals on what to do with the site and have a discussion. I think its a great resource and we should all continue to forward its cause.

I think that’s the better question. Ultimately this will fall into the hands of “hackers” and those looking to do something cool, make the next “killer app” or those that have a strict need for it.

Sometimes competition can be good. Perhaps out of competition, perhaps out of some other reason, the UK has decided to open up its own version of datasets, available to the public. You can read about it on Read Write Web here

Here are some other cool resources I’ve found just in researching for this article:

In closing - I need your help!

I wanna make a list of compiled datasets that are available to the public. From genomics to education to disease, it would be great to make an invaluable “listacle” that rivals the “top 10 textures for your next website design.” There is just such an article above at Read Write Web, but perhaps we can add to it, or make another one with potential applications.

Can you help? Just post your comment below with links and I will start compiling a list. If you have ideas on how to apply these datasets, Feel free to post them! You’ll be credited of course.