The DHS (Department of Homeland Security) is in an upheaval with just about everything. This spells trouble for their existence I think, though the repercussions may not be felt right away. Give it a few years at most.

DHS has gone on an all-out offensive against everyone and everything it seems like. From scarring 4-year old disabled kids to seizing websites without DUE PROCESS, The DHS has overstepped its boundaries and is willing to bet it can continue doing so. The average citizen is not very concerned with its limitation of rights as long as that person can keep up their world view and not be too disrupted by the change. But by encroaching into our daily lives with constant suspicion and regulation, did we already lose the terrorism battle?

If you showed a video of some of the TSA atrocities to a person on the street 10 years ago, claiming that was their future, they would probably laugh you out of that argument. But now we’re lining up for these suspect procedures that supposedly protect us, even though the procedures are highly REACTIONARY, which cannot PREVENT anything except the timeliness of a F$*$&!)$ flight.

Bomb in a shoe? Take off your shoes.

Bomb in a bra? Take out your fake breast. Yes, this is real.

What’s next? Bomb in your butt? Cavity search. Is this what it will take, or will people LITERALLY GET FUCKED FOR THE PERCEPTION OF SAFETY?

That is the power of incremental change—the classical “frog in a pot” scenario. You boil a frog right away, and it jumps out. But if you raise the temperature ever so slowly, eventually the frog is dead without even knowing it.

The vast swathes of apathetic and loathsome Americans that constitute the “average” and similar mental troglodytes worldwide are the frogs, and the pot is the government. The temperature of course are the policies that govern us.

Unfortunately, this mentality the U.S. has adopted will vex us by morphing into a whole new isolationist policy that is going to end in turmoil for our economy and fast forward a “brain-drain” of American thought leaders.

Legislative officials and political pundits were probably not as concerned (if even cognizant of) this, but it is a byproduct of the paranoia nanny-state we are witnessing the creation of. This nanny-state is forged with an unruly paranoia that has dug into the psyche of much of the populace, which will undoubtedly cause damage to the innovation of this country. Our role as an “innovation nation” will possibly be trampled into oblivion, just like the surge of non-salvageable U.S. companies.

DHS seizures stifle .us and .com registrations and lower the reputation of American websites.

I’m talking about the underhanded ICANN agreements the DHS have. The DHS does not even need to talk with your domain registrar to seize your website. They can go over the heads of these companies, straight to the ICANN—a body that manages domain registries for everyone. They can also do it without a cease-and-desist, or without prior notification. This is in direct violation of the due process of law.

Americans are already perceived worldwide as heavy-handed curmudgeons in the realm of diplomacy and its citizens accused of gross “entitlement”. What will this new DHS brand of insolence due to our already tarnished (ahem, RUSTED) reputation?

Do you look at Americans and say “WOW, what a great people, they/we are so… , and ____ ! No, but many people do say, "WOW, Americans are so ungrateful and lazy, we can totally get in on the action!”

TSA body scanners make traveling to and from the U.S. a pain not worth enduring. 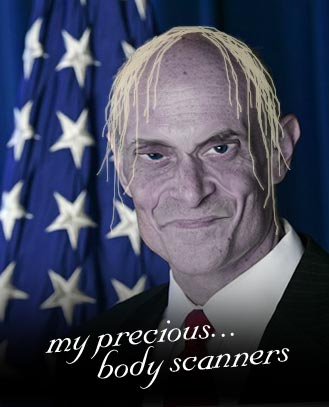 Thanks in part to major shareholder of Rapsican systems (makers of the body scanners) Michael Chertoff and George Soros, body scanners are being “fast-tracked” into public gatherings everywhere.

Nevermind the ABSURD conflict of interest that exists, let’s just look at how TSA is shooting itself in the foot for the long haul.

The TSA wants to put body scanners basically anywhere and everywhere. Oh, didn’t you hear? The DHS wants to introduce them into all public places, like train/subway systems, boats, federal buildings and potentially more. You can thank she-creature-slap-happy Janet Napolitano for that.

Well my big qualm with these procedures is that it doesn’t make us safer, but it DOES decrease travel and trust. It desensitizes people and lowers tourism. This coupled with the aforementioned measures creates distrust and anger towards Americans. These emotions can easily manifest themselves into a decrease in economical growth for America.