A trick has been played on us. We've constantly been defining the term "failure" as if it was a terrible, terrible black mark on the progress of our lives. Failure is in fact the exact opposite: failure creates success. 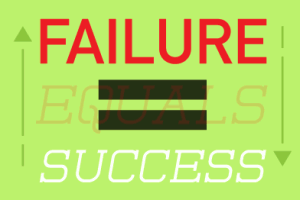 Or at least it usually does, in one way or another.

Ask yourself this: who has failed the most in modern history, and what successes did they achieve? The first few that popup were the innovators of our societal revolution: Descartes, Ford, Edison, Tesla, Einstein...all big fat failures. And all considered some of the greatest minds.

Now, even better, ask yourself who has failed most spectacularly, and what kind of person they were. I imagine some of those same names and even more great ones will crop up.

Now think about the people who have never failed, never did anything wrong, at least in the public eye.

Yea. It's a bit hard to pinpoint just who those people are. They kind of "disappear" from the landscape of history, don't they? That's because failure helps define you through perseverance!

It may not seem like it in the midst of your failing, but the tide of time will benefit your failing if you learn from it. That's the key though: learn from your failures.

If you fail and then make something of that failure, you will be remembered much more than if you had made no mistake at all.