Many people would agree that Google has been extremely successful in their ventures. But not nearly as many would be able to offer an explanation why. Sure, books and articles have been written, in attempts to uncover and explain these scenarios, but there is one keystone in this model of success: positive feedback loops.

Googles famous motto has always been “do no evil”. This has been their mantra, touted across their corporate culture and even used by naysayers to keep them in check.

In adopting this slogan, Google has forced itself to maintain a benevolent approach to their business, which has no doubt shaped the direction and usefuleness of their products. They rely on the power of users to really make their products thrive. Without openness, these users wouldn’t exist in the quantity they do.

Businesses that provide services that benefit everyone tend to grow faster and flourish, so long as their business model can sustain the infrastructure and still remain profitable.

That is the important distinction. In MikePK’s article, “Fall of the Benevolent Google”, he states:

Google has the luxury of being highly profitable, which allows it to branch out in many non-traditional ways.

I think this is an important distinction. It would seem at least for Google, their profit margin is directly correlated to their benevolent development, innovation and expirementation. While that remains a keystone, Google is likely to remain benevolent. If/when that falters, it is likely Google will have to stoop to lower standards to make ends meet. They may move away from fostering innovation, and align themselves with maintaining status quo. Microsoft is in that position now.

So what does that mean? I think it’s best explained in a diagram, because looking at pictures is definitely more interesting. 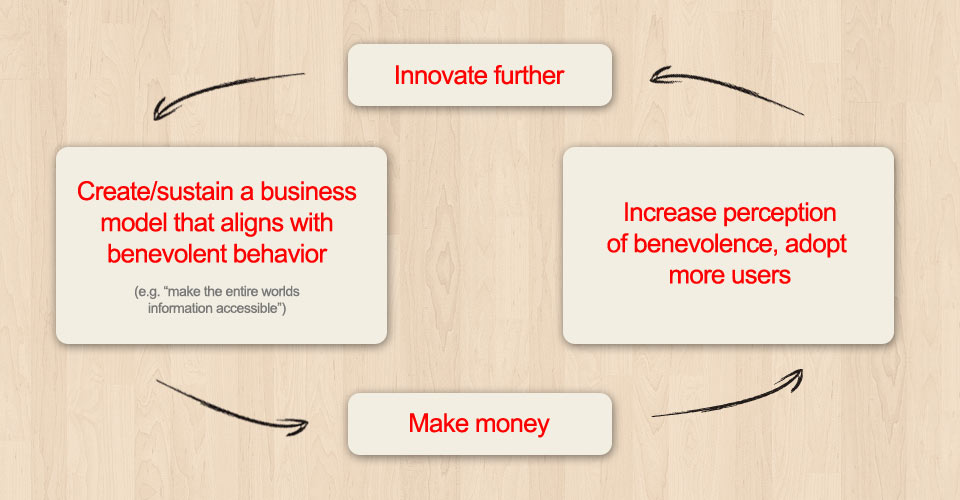 The main point to take away from this diagram is the need to create (from the beginning) a sustainable AND benevolent company. Or a company whose guiding principles are perceived as benevolent.